Opening for the first time in London in 1986, Andrew Lloyd Webber’s finest achievement, The Phantom of the Opera, won both the Tony Award and the Oliver Award in its first year. The second-longest running West end musical in history, topped only by Les Miserables, the Phantom of the Opera has endured a lifespan of almost 40 years in production, and four years ago saw its 100000th Broadway performance – the first musical in history ever to do so. Today, this legendary show has grossed more than $846 million, and has been seen by more than 130 million people across the planet. The Phantom of the Opera may well hold the title of most financially successful entertainment event EVER!

Phantom Of The Opera Tickets: 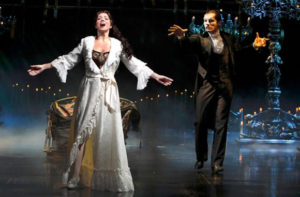 “SPECTACULAR in every sense of the word.”

What makes it so spectacular? Well, just about everything – the stunning costumes, ornate props, the jaw-droppingly beautiful and elaborate set designs, and of course the plot; the classic Gothic romance of the disfigured Phantom who falls in love with the beautiful soprano Christine. The show is most well-known, of course, for its music, which has escaped the constraints of the musical and found new life elsewhere, the main theme finding itself frequent radio airplay and covered by artists independent of the musical, such as Finnish symphonic metal band Nightwish.

“Every bit of it, from the costumes to the casting of minor characters, is gorgeous-looking and sounding.”

What makes the songs of this iconic musical so unique and thrilling is that they stay true to genre – the musical is entitled Phantom Of The Opera, and an opera is exactly what you get, with a full 19-piece orchestra, classical vocals throughout, and the entire plot, amazingly, very nearly sung through from start to finish.

Let the chandelier drop and the night begin. Get your tickets for this spine-tinglingly thrilling work of musical theatre now. It has to be seen to be believed! 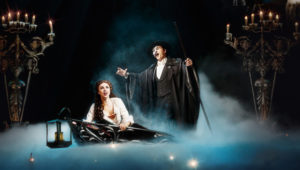