The Piano Guys. Don't be fooled by that rather simplistic name. They're a bunch of professional and virtuoso musicians who give piano music a 'wow factor'. They are one of the most followed musicians on social media due to their quirky yet spectacularly jaw-dropping videos and renditions of pop meet classical with an exciting newfangled twist. Social media fans clamored to see and hear The Piano Guys live. Thank your lucky stars because they'll just be in the neck of the woods, and are bound to hit the stage of the Orpheum Theatre Minneapolis on Thursday 14th November 2019. Lock-in tickets to this date, before tickets run out. Don't miss this delightfully amusing show. Book your tickets now! 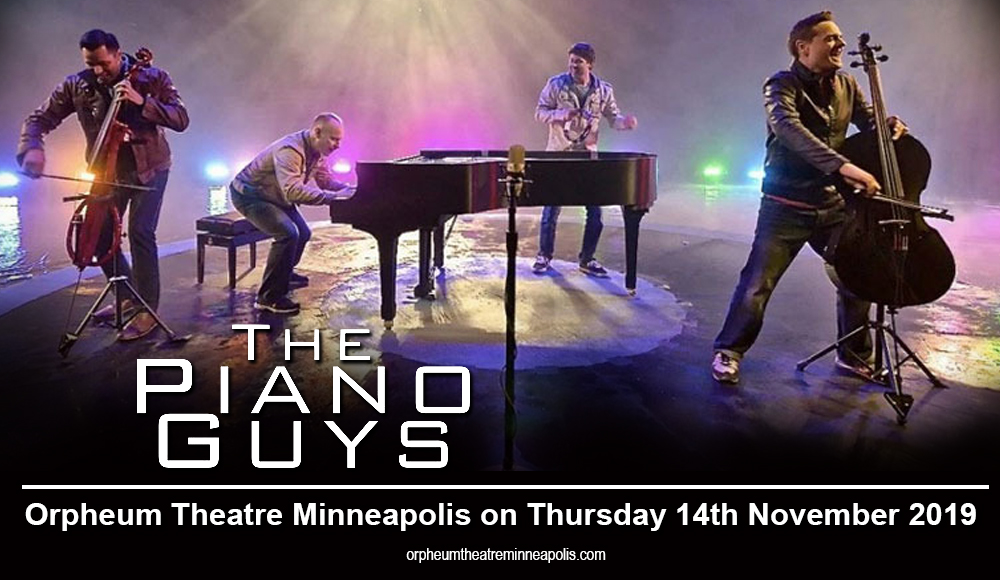 Over 1.7 billion video views and 6.5 million subscribers on YouTube alone. Plus a staggering number of followers on other social media sites. The Piano Guys ought to add 'phenomenal' to their name. Their story of how they met is the stuff that those biopics are made of… Paul Anderson owns a real piano store name 'The Piano Guys". "Pianist named Jon Schmidt walked into the store and asked if he could play and rehearse in one of the pianos. Those rehearsal months turned into video collabs between the two that Al Van Der Beek uploaded on YouTube every week. And with big help from a little more musician friends, 'The Piano Guys', YouTube statistics and views, audiences and followers grew in leaps and bounds. Soon enough, they were started collecting YouTube awards, where the band won the “Most Up-and-Coming Channel” award in the YouTube “On the Rise” contest, with their “Michael Meets Mozart” video. Then came a record deal from a major label, where they waxed their first six major-label studio albums– "The Piano Guys", "The Piano Guys 2", "A Family Christmas", "Wonders, Uncharted", and "Christmas Together"– each reaching number one on the Billboard Classical Albums and New Age Albums charts.

Their mashups of classical and contemporary music enthralled and endeared them to a new generation, impressed to hear the likes of Bach and Bruno Mars, or Vivaldi's "Winter" and Disney's "Let It Go" coming together in one musical piece, and the result is pure magic. With their main intention to “inspire, uplift, and make the world a better place” through their music, The Piano Guys have done so much more. Their elaborate videos–such as mounting a grand piano via helicopter onto the edge of a 1,000-foot cliff, definitely elicited a 'wow factor'. “We love showcasing the beauty of the earth—where people don’t expect to find classical instruments,” says Anderson. “Lots of parents are using our music to show their kids how fun classical music can be and motivate them to learn instruments,” says Schmidt. Nelson further adds: “a great way to introduce ourselves and make an instant connection with our audience as a classic spin on new stuff – and a new spin on classic stuff.”

The Piano Guys are definitely out-of-the-ordinary. This concert is really a must-see! Go get your tickets now!