The Band’s Visit depicts how we feel being lost in translation so well that you may feel like it is de javu. Watch them perform at the Orpheum Theatre Minneapolis on 10th till 15th December 2019, 7.30 pm. 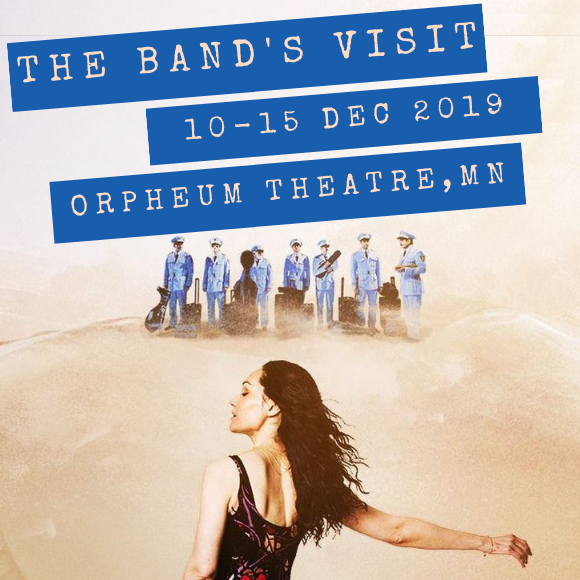 The Band’s Visit is a stage musical with music and lyrics by David Yazbek and a book by Itamar Moses, based on the 2007 Israeli film of the same name. In November 2017, after its off-Broadway premiere at the Atlantic Theater Company in December 2016, the musical opened on Broadway at the Ethel Barrymore Theatre and since then it has become a major hit on Broadway.

This story is filled with unique characters that represent our own lives when we are met with challenges. Below is the description of each character:

CAMAL: Concerned musician who jostles with the Telephone Guy to contact the Egyptian embassy and get help.

SIMON: Tewfiq’s second in command. Quiet and reserved, yet eager to try his hand at conducting. He’s composed a yet unfinished concerto. RESIDENTS OF BET HATIKVA

DINA: Charismatic and beautiful owner of the café. Intrigued by Tewfiq and his musicians, she generously arranges for the band’s lodging for the night.

ITZIK: Henpecked and disillusioned husband and father married to Iris. Ruminates with Simon on completing his concerto.

IRIS: Itzik’s headstrong and long-suffering wife who’s resigned herself to life with Itzik.

AVRUM: Iris’s father and former musician who regales the visiting band members with stories of his musical passions.

PAPI: Tousled and painfully shy worker at the café who relies on Haled to help him overcome his panic relating with girls.

ZELGER: Brash and charismatic friend of Papi’s who sets Papi up for a night on the town.

ANNA: Zelger’s extroverted date who brings Julia along for a blind date with Papi.

TELEPHONE GUY: Dedicated romantic waiting expectantly for his girlfriend to phone him at the town’s payphone.

SAMMY: Dina’s ex-lover who she unexpectedly meets when dining out with Tewfiq.

Each of this character is assigned to make you feel like you are a part of the musical. Be charmed by their perfectly choreographed acts.

Do not hesitate to purchase your tickets today!