Orpheum Theatre Minneapolis brings you the sensational Tedeschi Trucks Band on Friday 2nd November 2018! This incredible blues rock behemoth of a band, led by the ever-impressive husband and wife duo Susan Tedeschi and Derek Trucks, plays music you can feel in your bones! Prepare to by blown away at An Evening with TTB – it's going to be one hell of a show! 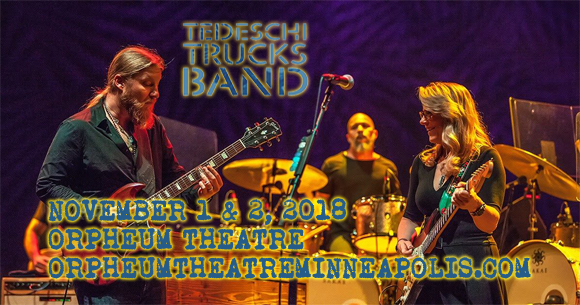 American blues rock group The Tedeschi Trucks Band formed in Jacksonville, Florida in 2010 and is led by married couple Derek Trucks and Susan Tedeschi. Tedeschi formed the Susan Tedeschi Band in 1993 and met Trucks, who was the slide guitarist for the Allman Brothers Band, in New Orleans when she opened for the Allman Brothers Band on their 1999 Summer Tour. Trucks was also the bandleader and lead guitarist of The Derek Trucks Band, until their hiatus in 2010. The couple married in 2001, and after touring together in 2007 as the Derek Trucks & Susan Tedeschi's Soul Stew Revival, which featured members of The Derek Trucks Band, members of Susan Tedeschi's band and several other musicians, they amalgamated their individual groups to form The Tedeschi Trucks Band. In 2011, the band released its debut studio album, Revelator, which went on to win the 2012 Grammy Award for Best Blues Album. The group's third and most recent studio album, Let Me Get By (2016), debuted at number 15 on the Billboard 200. Their most recent release is the 2018 live album Live from the Fox Oakland, which was nominated for the 2018 Grammy Award for Best Contemporary Blues Album.