This is definitely an affair to remember… "One Night Affair' featuring Johnny Gill, Monica & Ralph Tresvant at Orpheum Theatre Minneapolis on Saturday 16th November 2019. Once hailed as the most promising superstars of their time, Johnny Gill, Monica & Ralph Tresvant have now transitioned and evolved into illustrious R&B icons. As a triumvirate, they're seizing the live concert stage with their soul-pop, new jack swing, RnB superpowers and embarking on a tour de force dubbed as "One Night Affair". If you're looking for a quiet storm of emotions, a soulful respite, and a surge of passions, you're in the right place. But first – tickets. No need to wander off far from this space. Just click the 'buy tickets' button on this website to secure your seat to one of the most memorable and enchanting nights you'll experience in this lifetime. Book your tickets now! 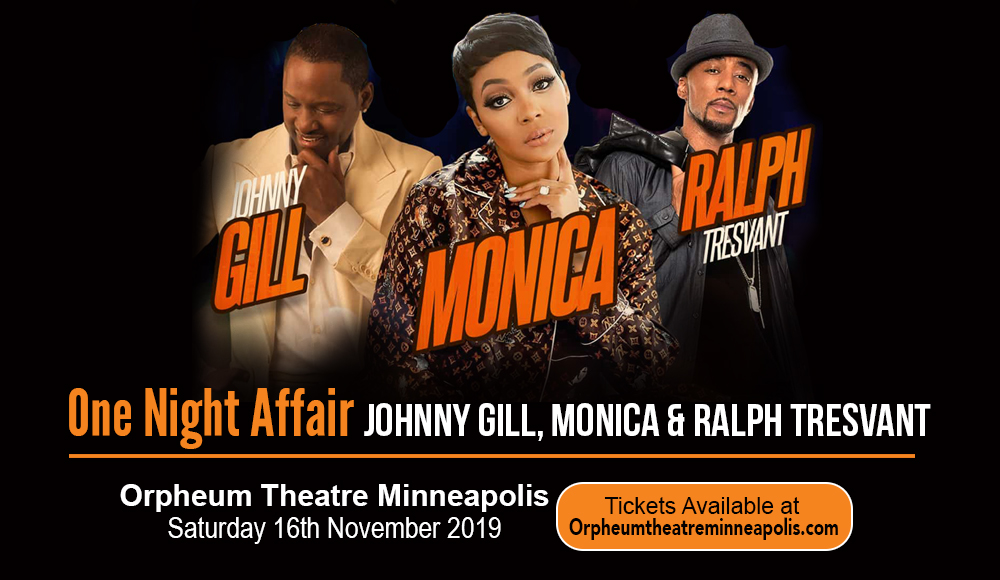 MONICA:
Monica's super-stellar status went beyond 'just-one-of-dem-days' status. She has definitely gone far ever since she was discovered at the age of eleven, by music producer Dallas Austin at the Center Stage auditorium in Atlanta performing Whitney Houston 1986's "Greatest Love of All". From there, a record deal and recording ensued, debuting in 1993 with the album "Miss Thang". Monica marked her territory by releasing a succession of number-one hits on the pop and R&B record charts, including "Before You Walk Out of My Life", "Don't Take It Personal (Just One of Dem Days)", "Like This and Like That", "The Boy Is Mine", "The First Night", "Angel of Mine", "So Gone", and "Everything to Me". According to Billboard, she is the youngest recording act to ever have two consecutive chart-topping hits on the Billboard Top R&B Singles chart, as well as the first artist to top the US Billboard Hot R&B/Hip-Hop Songs chart over the span of three consecutive decades (1990s, 2000s, and 2010s) [source: Wikipedia]. To date, Monica has sold 5.3 million albums in the US alone; a four-time Grammy nominee, winner of aGrammy Award for Best R&B Performance by a Duo or Group with Vocals for "The Boy Is Mine" a recipient a Billboard Music Award, a BET Award, two BMI Pop Awards.

JOHNNY GIL:
Johnny Gil has enjoyed the both the highs of a succesful career with a group, and basked in the limelight as well as a solo artist. Gill's recording career began in 1982, at the age of 16 as he teamed up with Stacy Lattisaw for the duet album and single "Perfect Combination". In 1987, when he was recruited by Michael Bivins to join New Edition, unleashing a more adult-soulfu sound with hit singles which include "Can You Stand The Rain", "N.E. Heartbreak", "If It Isn't Love", and the Gill-led "Boys To Men". In 1990, Gil emerged as a new jack swing artist, and spawned the hits "My, My, My", "Rub You the Right Way", "Fairweather Friend", and "Wrap My Body Tight". In 1993, Gill released another solo project, Provocative, which included the songs "Quiet Time to Play", "A Cute, Sweet, Love Addiction", and the gospel song, "I Know Where I Stand".

RALPH TRESVANT:
Gen-Xers can never forget that cute, soulful voice that roused everyone to "Cool It Now". Yes, Ralph blazed trails with the New Edition boy group, imapcting and influencing the sound, attitude, and style of boy bands of today. As other members of the New Edition eventually transitioned and flourished with their solo careers, the shy and quite Ricky reluctantly embraced going solo as he released his self-titled debut in 1990. The lead single "Sensitivity" spent 20 weeks, including two weeks at No. 1, on the U.S. R&B Singles chart. The album spawned Top 5 hit singles "Do What I Gotta Do" and "Stone Cold Gentleman", propelling the album to sell two million copies, and achieving double-platinum status.