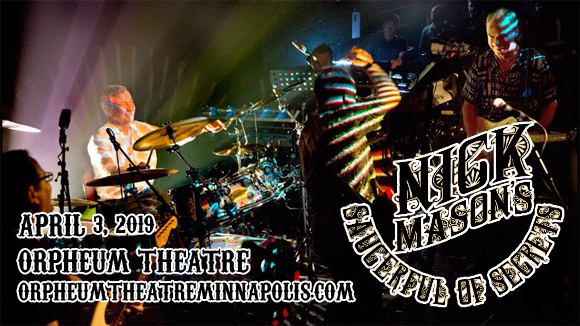 The brainchild of Pink Floyd founding member and drummer Nick Mason and guitarist Lee Harris, Nick Mason's Saucerful of Secrets is an English psychedelic rock band that plays the early music of Pink Floyd. Aiming to "capture the spirit" of the early music of Pink Floyd, rather than act as a tribute band, the group consists of Mason, Harris, Gary Kemp of Spandau Ballet on guitars and vocals, and longtime Pink Floyd collaborator Guy Pratt on bass. Their live debut was at Dingwalls in London in May 2018, where they performed a set of pre-1973 Pink Floyd material. The group will tour throughout 2019, compiling their set-lists from the songs on the 2016 Mason-curated Pink Floyd boxset, The Early Years 1965-1972, to compile their set-lists.