When a musician's name is synonymous to the works of the likes of B.B. King, Chet Atkins, Chris Botti, the Chieftains, Eric Clapton, Bob Dylan, Elton John, Bryan Ferry, Van Morrison, Steely Dan, Sting, James Taylor, and a whole lot more of hitmakers, it only means that they're the best of the best, one who's at the top of his game. One such artist is MARK KNOPFLER. Lauded for his smooth guitar licks, Knopfler has achieved a two-pronged level of success both as a major artist and as a session musician. But you could experience another side of his artistry — as that of a concert performer. Catch Mark Knopfler at the Orpheum Theatre Minneapolis, on Friday 30th August 2019, and witness his amazing body of work performed live, right before your very eyes. Fans wouldn't trade this awesome experience for anything. Best thing to do is be quick with your fingers and book tickets a.s.a.p. to this amazing show. 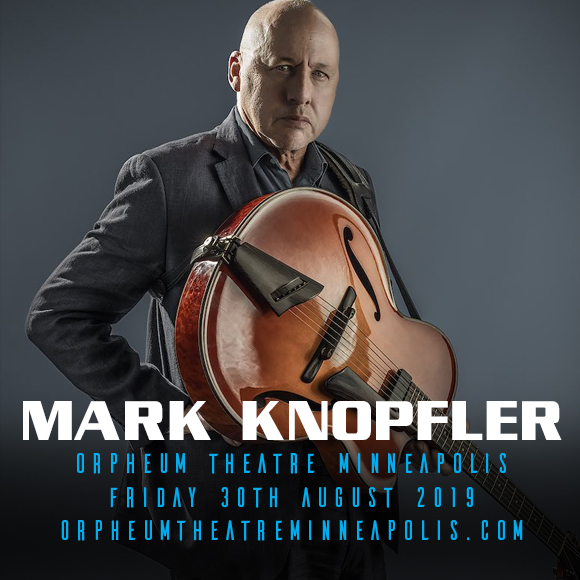 If guitar gods are said to be living here on earth, one of them would definitely be Mark Knopfler. He is said to be a guitarists' guitarist and a singer-songwriter to boot. Playing at the top of his game and living up to the epitome of a real guitar hero. His illustrious career had its beginning when he and his brother David founded the band Dire Straits in 1977, and had a successful run with monster rock hits such as "Romeo and Juliet," "Sultans of Swing," "Walk of Life," "Money for Nothing," "Private Investigations," and "Twisting By the Pool." Dire Straits broke up in 1995, and from there, Mark took up the cudgels and ventured on a solo career and other music projects. As a solo artist, he has a long string of hits to his name which include: "What It Is," "Sailing to Philadelphia," "Boom, Like That," "Punish the Monkey," and "True Love Will Never Fade." In addition to his burgeoning solo career, Knopfler took to wearing the hat of that of a session musician and record producer, where he collaborated with a distinguished roster of superstars –B.B. King, Chet Atkins, Chris Botti, the Chieftains, Eric Clapton, Bob Dylan, Elton John, Bryan Ferry, Van Morrison, Steely Dan, Sting, James Taylor, Tina Turner, Randy Newman, among many others. And as if these were not enough, he also scored music for films like "Local Hero", "The Princess Bride", "Comfort and Joy", "Cal", "Last Exit to Brooklyn" and "Wag the Dog".

Having the distinction of holding the position of being in 27th place for Rolling Stone magazine's list of 100 Greatest Guitarists of All Time, Knopfler is indeed an artist worth watching live onstage. Legions of his loyal fans are on the run to get their hands on tickets to the show. Seeing a real guitar hero live and in the flesh is truly worth the experience.