Multi-platinum selling Welsh artist Marina comes to Orpheum Theatre Minneapolis on Monday 14th February 2022 as part of her Ancient Dreams in a Modern Land Tour! The tour is promoting the performer's fifth studio album, which sees her truly embracing her unique and distinctive brand of honest, catchy electro-pop! Enjoy listening to songs like "Man's World", "Purge the Poison", the title track, and "Venus Fly Trap" live for the first time! 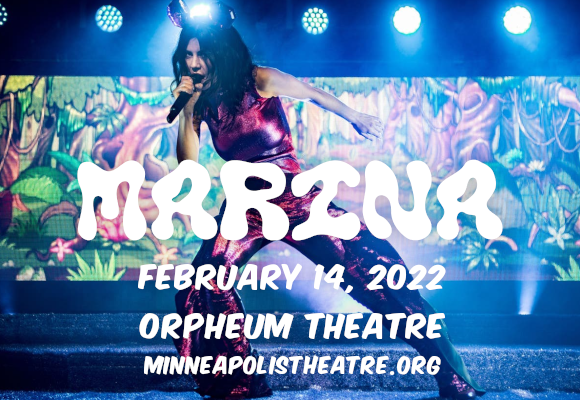 Marina (previously known as Marina and the Diamonds) is a Welsh singer, songwriter, musician, and record producer who came to prominence in 2009 when she placed second in the BBC’s Sound of 2010. She released her debut studio album, The Family Jewels, in February 2010, reaching number 5 on the UK Albums Chart and number 2 on the Billboard Heatseekers Chart. Her sophomore album, 2012’s Electra Heart, was a concept album about a character of the same name and debuted at number one on the UK Albums Chart, also reaching the Top 40 of the Billboard 200 and number two on the Top Dance/Electronic Albums Chart. Froot (2015), her third studio album, was Marina’s first entry into the Top 10 of the Billboard 200, debuting at number eight on the chart and also peaking at number 10 on the UK Albums Chart. Her fifth and most recent studio album, Ancient Dreams in a Modern Land, was released in June 2021 and was preceded by the singles "Man's World", "Purge the Poison", the title track, and "Venus Fly Trap".