Join Wayne, Daryl, Katy, Dan, Reilly, Jonesy, Stewart, Roald, and Coach for Letterkenny Live, coming to Orpheum Theatre Minneapolis on Wednesday 4th May 2022 (Rescheduled from Wednesday 2nd March 2022)! Your favorite Hicks will be up to their usual antics, bringing the full small-town experience to the stage! There'll also be stand-up set from the cast, plenty of audience interaction, and never-before-seen skits to have you rolling in the aisles! 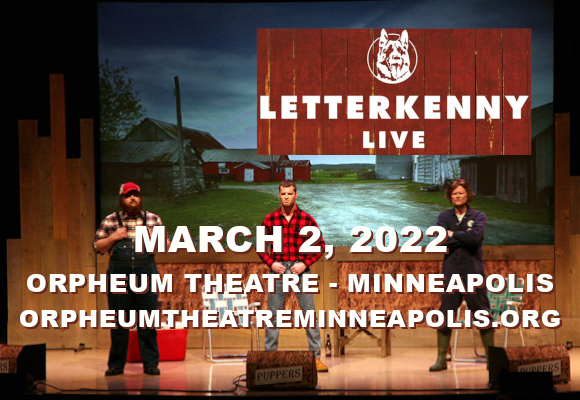 Canadian television sitcom Letterkenny was created by Jared Keeso, developed and written primarily by Keeso and Jacob Tierney, and is directed by Tierney. Initially a web series called Letterkenny problems, which Keeso released on YouTube in 2013, the show was commissioned by Crave in 2015 and airs on Hulu in the US. It is based around siblings Wayne and Katy, who run a small farm in the fictional 5000 person strong rural Canadian community of Letterkenny. As of 2021, the show has been greenlit for a tenth and eleventh season and the spin-off series Shoresy has been announced. The series won the award for Best Comedy Series at the 5th Canadian Screen Awards in 2017.