Are you gonna go this way? All roads now are leading to the Raise Vibration of rock and soul singer, songwriter, producer, multi-instrumentalist and actor Lenny Kravitz. He's making his way to this side of town for a performance at the Orpheum Theatre Minneapolis on Sunday 8th September 2019. Oozing with hot as magma sexy appeal and a multi-faceted musicality, Kravitz has an irrepressible throng of fans who will stop at nothing to get tickets to the show. Waste no time in booking tickets because the high-demand alert has been sounded. Get your tickets now! 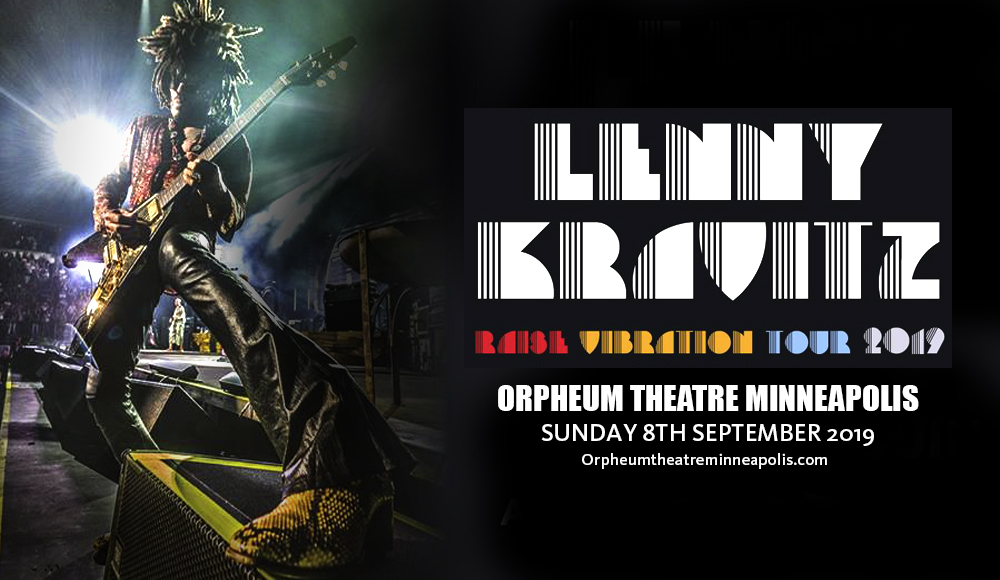 How can one tame a sexy beast? That's next to impossible for consummate and passionate rocker Lenny Kravitz. In his 20-year plus career in music, no one could quite put a pin down on his style or his genre. He has got a retro vibe going that integrates elements of rock, blues, soul, R&B, funk, jazz, reggae, hard rock, psychedelic, pop, folk, and ballads. Apart from singing, Kravitz is literally a one-man show in the recording studio. He takes care of singing lead and backing vocals, and plays all of the instruments by himself during recording.

Lenny Kravitz is a certified hit machine that has churned out raging chart-toppers such as "Are You Gonna Go My Way", "Fly Away", "Rock and Roll Is Dead", "Again", "It Ain't Over Til It's Over", "Mr. Cab Driver", and many more.
With this, he has a collection of awards and recognition. He has broken and set new records for his win at the Grammy Awards for Best Male Rock Vocal Performance four years in a row from 1999 to 2002; making him as one who had the most wins in that category as well as setting the record for most consecutive wins in one category by a male. He has amassed nominations and awards from the American Music Awards, MTV Video Music Awards, Radio Music Awards, Brit Awards, and Blockbuster Entertainment Awards. He was also ranked number 93 on VH1's 100 Greatest Artists of Hard Rock.

His live concerts are larger than life. The elaborate lights, sounds, and stage set-up are just a prelude to the raging volcano bound to explode. Kravitz fills every nook and cranny of the concert venue with ecstatic thrills and pulse-pounding excitement.

Go your way to book tickets before this opportunity flies away. Get your tickets now!