Get ready for another sensational event at the Orpheum Theatre Minneapolis. On Saturday 2nd March 2019, Christian contemporary singer-songwriter Lauren Daigle! takes to the stage with her beautiful new album, “Look Up Child”. Tickets available now and expected to sell fast, so don’t delay – get yours now while you can. 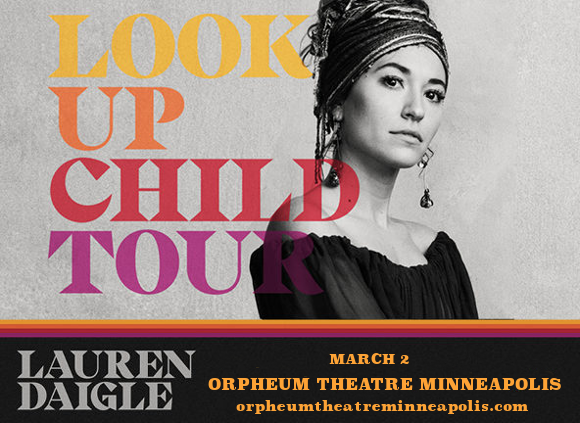 Growing up in Lafayette, Georgia, on a diverse blend of f zydeco, blues and Cajun music, Lauren Daigle, despite being a gifted singer as a child, was never sure if music was her true calling until she was struck by a terrible illness, infectious mononucleosis, resulting in her being kept out of school for almost two years. As she recovered, she gained a new appreciation for life and her calling, and began to firmly pursue a career as a musician.

She first appeared on North Point InsideOut's album, “Hear”, where she recorded "Close" and "You Alone”. Her debut album, “How Can It Be,” charted at No.1 on the Christian albums chart. With her eclectic style, she has brought many new followers into the Christian rock genre.

Despite her widespread appeal, Lauren Daigle is open about being a Christian artist both in her personal life and lyrical content. "I don't shy away from singing about my faith,” she said in an interview. “I think it conveys honesty, and people see authenticity. More people are going to relate to my music if it's sincere. I believe that wholeheartedly. That's how you reach people that might not have felt that was their home before.”

Get ready to experience the magic of Lauren Daigle’s music for yourself – get your tickets today!