Chart-topping Texan country music sensation Justin Moore comes to Orpheum Theatre Minneapolis on Friday 10th April 2020 on the Late Nights and Longnecks Tour! Supporting the release of his sixth studio album, Moore will be performing brand new material, including the number one hit“The Ones That Didn’t Make It Back Home,” as well as other fan favorites! He'll be joined for his new tour by neo-traditional country support act Tracy Lawrence, who recently released his 15th studio album Made in America! 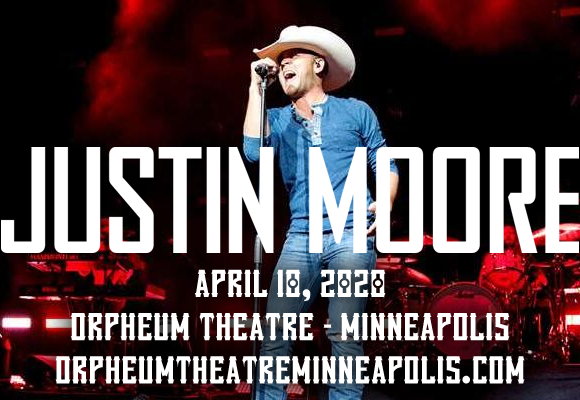 American country music singer and songwriter Justin Moore found instant recognition on the country music scene with his self-titled debut album in 2009. The album launched the singles "Back That Thing Up", "Small Town USA" (which became his first number one hit on the Billboard Hot Country Songs chart), "Backwoods" and "How I Got to Be This Way", and it peaked at number three on the Billboard Top Country Albums chart and number 10 on the Billboard 200. His success continued with three consecutive number one albums on the Billboard Country Albums chart: Outlaws Like Me (2011), Off the Beaten Path (2013) and Kinda Don't Care (2016). The album launched several more number one hits for Moore, including: "If Heaven Wasn't So Far Away", "Til My Last Day", "Lettin' the Night Roll", "You Look Like I Need a Drink", and "Somebody Else Will". His sixth and most recent studio album is 2019's Late Nights and Longnecks.