Grammy Award-winning blues-rock luminary Joe Bonamassa comes to Orpheum Theatre Minneapolis on Saturday 14th March 2020! From face-melting solos to tender ballads, Bonamassa excels as a blues artist in every way and, depite a prolific back-catalog, remains ever-fresh and relevant as one of the greatest blues performers of his generation! Bonamassa's shows are always lively, atmospheric and captivating, and his tickets are sought-after, so don't miss your chance to see this legendary bluesman live! 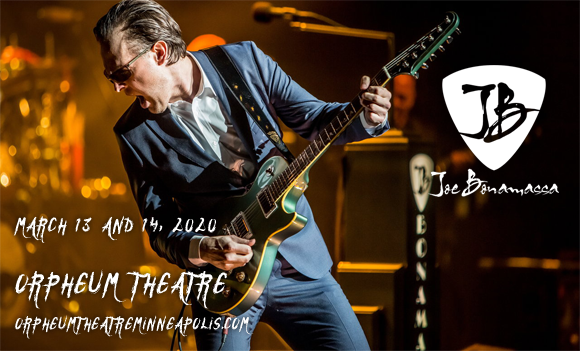 Considered to be one of the world's greatest blues guitarists, Joe Bonamassa is a prodigious talent, who began playing at only four years old, and was the frontman of his own band, Smokin' Joe Bonamassa, by the age of 12. Bonamassa has had the opportunity to perform with many of his heroes throughout his career, beginning with a 20-date support stint for BB King in the same year he formed his first band. In his late teens, he formed Bloodlines with the sons of Miles Davis, Robby Krieger, and Berry Oakley, and as an adult he has collaborated and performed with numerous well-respected artists, including Stephen Stills, Eric Clapton, Blondie Chaplin, Foreigner, Buddy Guy, Steve Winwood, Warren Haynes, and Derek Trucks, among others. In 2000, Bonamassa released his debut solo album, A New Day Yesterday – the first of his 15 solo studio albums to date, all of which have reached the top 10 on the Billboard Blues Chart and 11 of which have reached the top spot.