Aussie political commentator, stand-up comedian and generally hilarious bloke, Jim Jefferies, comes to Orpheum Theatre Minneapolis on Saturday 18th May 2019 on his Night Talker Tour! Jefferies will be performing all-new material to get you roaring with laughter, as he covers day-to-day observations, current events and more! Tickets available now! 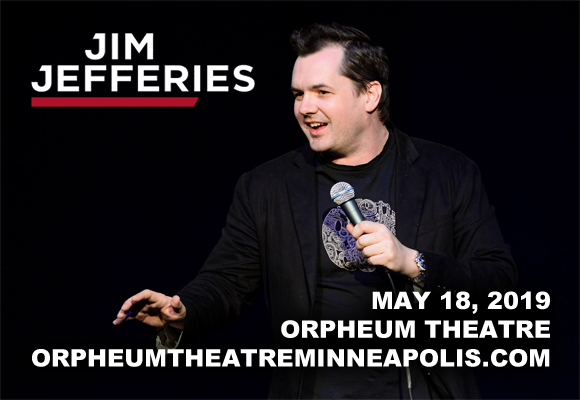 Although he had previously worked as a comic for several years, Australian stand-up comedian, political commentator, actor, and writer Jim Jefferies first came to prominence in 2007, when he was attacked by an audience member on stage at the Manchester Comedy Store in Manchester, England. Jefferies began to use footage of the event in his live show, and wove it into his 2008 comedy tour, Contraband, as well as in the show's live DVD. The following year, he found success in the US with his debut HBO comedy special, I Swear to God. His success continued both in the US and internationally over the next few years, with appearances at several global comedy festivals, including the Edinburgh Festival Fringe, Just for Laughs Festival, Melbourne International Comedy Festival, Reading and Leeds Festivals and Glastonbury Festival. From 2013 – 2014, Jefferies created and starred in his own FX sitcom, Legit, and as of 2017, he has hosted the Comedy Central late-night talk and news satire television program The Jim Jefferies Show. He has released seven stand-up comedy specials to date, his most recent being 2018's Netflix special Jim Jefferies: This Is Me Now.