The biggest-selling comedy recording artist in history, and a multiple Grammy Award-nominee, Jeff Foxworthy comes to Orpheum Theatre Minneapolis on Saturday 20th November 2021 for a night of hilarity! The Blue Collar Comedy Tour troupe member and TV host is always side-splitting fun, and is a one-man laughter machine! Known for his iconic “You might be a redneck…” one-liners, Foxworthy throws 'em up and knocks 'em down with hysterical results! 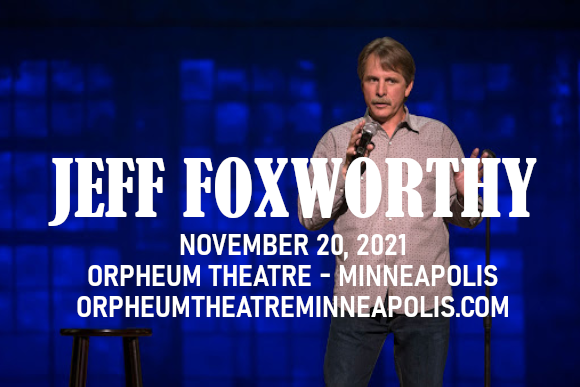 American stand-up comedian, actor, television personality, radio personality and author Jeff Foxworthy began his career in the 1980s, becoming well known through the release of his 1993 comedy album You Might Be a Redneck If…, which began the craze of his signature "You Might Be a Redneck" one-liners, topped the comedy album charts and sold more than three million copies. To date, he has released six comedy albums, and his first two were both certified triple-platinum by the RIAA. Foxworthy is also known as being a member of the Blue Collar Comedy Tour, alongside Larry the Cable Guy, Bill Engvall, and Ron White. In the mid-1990s, Foxworthy starred in his own sitcom called The Jeff Foxworthy Show. He has hosted several TV shows over the years, including the quiz show Are You Smarter Than a 5th Grader? on Fox and GSN's The American Bible Challenge. He has also authored several joke books and the autobiography No Shirt, No Shoes… No Problem!