Legendary talk show host, writer, producer and comedian Conan O'Brien brings his hilarious stand-up back on the road for the first time in eight years, heading to Orpheum Theatre Minneapolis on Thursday 29th November 2018! Not only will fans be treated to a full set of Conan, but the show, titled Conan & Friends: An Evening of Stand-Up and Investment Tips, will also feature the incredible comedic talents of Ron Funches, James Veitch, Taylor Tomlinson, and Flula Borg! 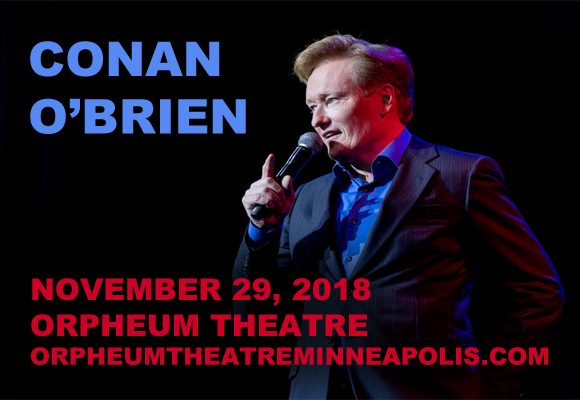 American television host, comedian, writer, and producer Conan O'Brien began his career as a writer for the sketch comedy series Not Necessarily the News in 1983, upon graduating Harvard University where he had served as president of The Harvard Lampoon. O'Brien was hired as a writer for Saturday Night Live in 1988, where he worked until 1991 when he became a writer and producer for The Simpsons. He worked for The Simpsons for two seasons until 1993, when he took over David Letterman's position on NBC's Late Night, which he hosted until 2009. During his tenure as Late Night host, O'Brien won his second Emmy Award alongside the Late Night writer's team, as well as the Writers Guild Award for Best Writing in a Comedy/Variety Series six times. O'Brien replaced Jay Leno on The Tonight Show for one season from 2009 – 2010, before moving to TBS to host a new show, Conan, which was renewed in 2017 through 2022. His launches his second major stand-up tour (his first being 2010's The Legally Prohibited from Being Funny on Television Tour) in November 2018.