Ladies and gentlemen, prepare for the show of a lifetime!! From the creators of Riverdance comes Celtic Woman, the 5-piece ensemble of Irish vocalists and musicians that blew the world away with their appearance on PBS television at The Helix in Ireland, performing to a sold-out audience!! Now on tour with their latest album Celtic Woman: Voices of Angels, the group is coming to the Orpheum Theatre Minneapolis on Tuesday 13th June 2017!! Don’t delay – get your tickets to this uniquely Irish experience today while they last!! 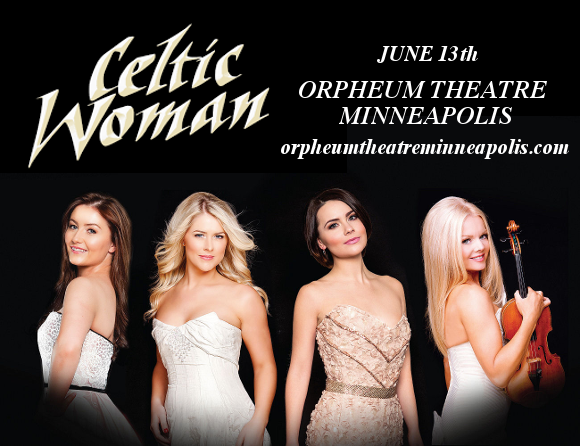 Celtic Woman is the masterpiece of David Kavanagh, Sharon Browne, and David Downes of Riverdance. In 2004, he gathered 5 Irish performers who had never played together – Chloe Agney, Orla Fallon, Lisa Kelly, Meav Ni Mhaolchata, vocalists, and Mairead Nesbitt, fiddler, to form the speciality group that became Celtic Woman. With a repertoire that included cover versions of modern pop songs as well as traditional Celtic folk songs, the group wowed audiences the world over with their very first performances, their popularity buoyed by the success of Celtic-incorporating popular musicians such as Enya, Clannad, and Moya Brennan.

The group have gone on to release 11 successful albums. With their complex intertwined melodies, glorious harmonies and old-world sound, the beautiful sound that is Celtic Woman has been described as “Riverdance for the voice”. Don’t miss your chance to catch this exquisite phenomenon of unbelievable talent live – book your tickets to see Celtic Woman live NOW, while they last!!