He's here, he's shirtless and he's gonna blow your mind! The ultimate party monster, Bert Kreischer comes to Orpheum Theatre Minneapolis on November 18th 2021 for a night of full-on hilarity! The comedian, actor, writer and good-time-dude proved himself to be insanely popular through his 2019 Body Shots World Tour, selling out shows all over the globe. Now he returns to the stage for even more mischief, madness and mayhem on the Berty Boy Tour! 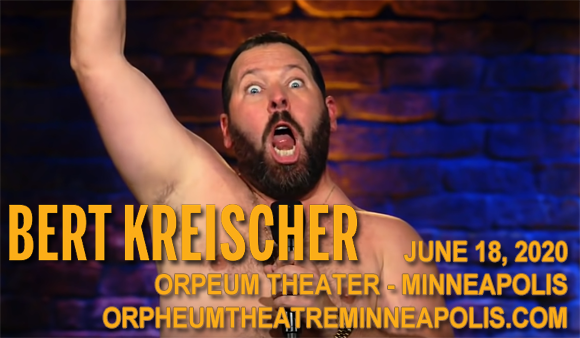 Named by Rolling Stone in 1997 as "the top partyer at the Number One Party School in the country," Bert Kreischer has taken his party boy lifestyle and developed a successful entertainment career as a stand-up comedian, reality television host and actor. Two of Kreischer's stand-up specials, Secret Time and The Machine, are currently streaming globally on Netflix and he currently hosts two podcasts: Bertcast and Open Tabs, as well as the YouTube cooking show Something’s Burning. He has also hosted several television shows throughout his career, including Hurt Bert on FX, and Bert the Conqueror and Trip Flip on Travel Channel, and he is the author of Life of the Party: Stories of a Perpetual Man-Child (2014).