Get ready for a tasty dose of nostalgia as 90s Kickback Concert comes to Orpheum Theatre Minneapolis on Saturday, May 1st 2021! Bringing together a killer line-up of some of the hottest R&B acts of the day, this show will get you bumping and grinding along to all your favorite tunes and feeling like a teenager again! Dru Hill, Avant, H-Town & Case will all be performing at this musical trip down memory lane, so expect to be dancing all night and get your lungs ready for a night of singing, screaming and hollering "That's my jam!" 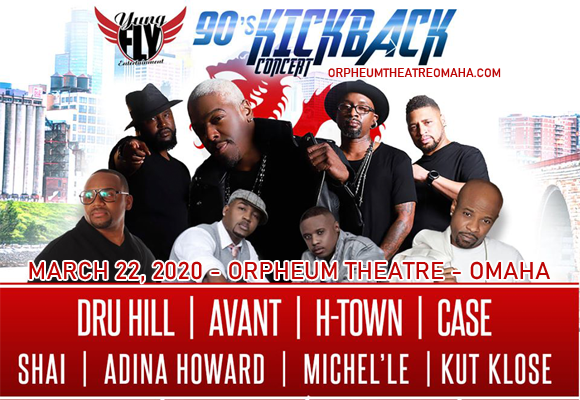 Originally comprised of lead singer Mark "Sisqó" Andrews , Tamir "Nokio" Ruffin, Larry "Jazz" Anthony and James "Woody Rock" Green, Dru Hill were a huge part of the 1990s R&B scene, with their soul, hip hop soul and gospel-tinged songs. The hit-makers were radio mainstays at the time, charting seven Top 40 hits, including the R&B number one singles "In My Bed", "Never Make a Promise", and "How Deep Is Your Love". The band's first two albums, Dru Hill and Enter the Dru, were both essentials for any R&B fan and are considered R&B classics. Over the years, the group has continued to tour and record together, with a few line-up change, including the addition of Jawaan "Smoke" Peacock, Benjamin "Black" Bush from the R&B group Playa. In 2010, Dru Hill had their own television show titled Keith Sweat's Platinum House. Their latest album is 2019's The Second Coming.